Richard Goode has been hailed for music-making of tremendous emotional power, depth and expressiveness, and is recognised worldwide as one of today’s leading interpreters of Classical and Romantic music. An exclusive Nonesuch artist, Goode is a regular performer in the major recital halls and festivals across Europe and the US and performs as soloist with some of the world’s finest orchestras.

Richard Goode has been hailed for music-making of tremendous emotional power, depth and expressiveness, and is recognised worldwide as one of today’s leading interpreters of Classical and Romantic music. An exclusive Nonesuch artist, Goode is a regular performer in the major recital halls and festivals across Europe and the US and performs as soloist with some of the world’s finest orchestras. In a recent season, the Daily Telegraph said “There are brilliant young things among pianists, and there are wise old birds, who show their wisdom naturally in everything they do, without grandstanding or elaborate highlighting of details. Richard Goode is one of the latter sort.”

In recital, Goode performs every season at London’s Wigmore Hall and in major musical centres across Europe, which in recent seasons has included Paris, Lyon, Verbier, Amsterdam, Budapest, Madrid, Stockholm, amongst others, and he has been a regular performer over the years at the Edinburgh International Festival, Kissinger Sommer and Pianos aux Jacobins (Toulouse). In 2019/20, highlights include his debut with the Radio Symphony Orchestra under Jurowski and an appearance at the Sommets Musicaux de Gstaad Festival, as well as a recital tour across Italy and a UK festivals tour, finishing with a return to the Oxford Piano Festival in the summer of 2020.

In the US Goode performs in all the major cities, and in 2019/20 appears in recital at the Philadelphia Chamber Music Society, in New York at Tisch Center for the Arts, in Boston, San Francisco, Atlanta, Houston, and in Canada in Montreal and Toronto.

Goode has performed as soloist with most of the major orchestras across the US and many across Europe; recent highlights included debuts with Oslo Philharmonic and Deutsche Kammerphilharmonie, and returns to the New York Philharmonic, Los Angeles Philharmonic, London Philharmonic, Orchestre National du Capitole de Toulouse, and Cleveland Orchestra.

Goode has made more than two dozen recordings over the years, ranging from solo and chamber works to lieder and concertos. His latest recording of the five Beethoven concertos with the Budapest Festival Orchestra/Iván Fischer was released in 2009 to exceptional critical acclaim, described as “a landmark recording” by the Financial Times and nominated for a Grammy award. His 1993 10-CD set of the complete Beethoven sonatas cycle, the first-ever by an American-born pianist, was nominated for a Grammy and chosen for the Gramophone Good CD Guide and re-released in 2017. Other recording highlights include a series of Bach Partitas, a duo recording with Dawn Upshaw and Mozart piano concertos with the Orpheus Chamber Orchestra.

A native of New York, Goode studied with Nadia Reisenberg at the Mannes College of Music and with Rudolf Serkin at the Curtis Institute. His numerous prizes over the years include the Young Concert Artists Award, First Prize in the Clara Haskil Competition, the Avery Fisher Prize, and a Grammy award. His first public performance of the complete cycle of Beethoven sonatas at New York’s 92Y in 1987/8 was hailed by the New York Times as “among the season’s most important and memorable events” and was later performed with great success at London’s Queen Elizabeth Hall in 1994 and 1995.

Goode is also a highly respected teacher and mentor of young musicians and holds the position of International Chair of Piano Studies at London’s Guildhall School of Music and Drama, Visiting Professor at the Royal Academy of Music, and is on the faculty at Mannes College (New York). He frequently leads masterclasses at some of the world’s most prestigious institutions, including at the Manhattan School of Music, Verbier Festival Academy, and in the public masterclass series at Wigmore Hall. 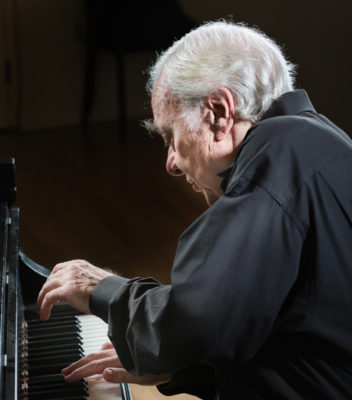